What is a "server" in Otter?
Contents

What is a "server" in Otter?

Otter works with both Windows and Linux servers as well as physical (bare metal) or virtual servers, hosted in your own datacenter or in the cloud. A "server" in Otter is essentially a connection to one of your servers, wherever it may be.

Once you have prepared your server for Otter, you will be able to:

Preparing Your Servers for Otter

Otter can communicate with servers that have the Inedo Agent installed or use "agent-less" communication with PowerShell remoting (WMI) or with SSH.

The Inedo Agent was designed expressly to communicate with Inedo products, offering:

To install the Inedo Agent, you can follow our step-by-step guide for the GUI-based installer or use more advanced options like silent installation or manual installation.

Otter can also use WS-Management (WMI). This is the same channel that PowerShell remoting uses and is available only on the Windows platform.

The easiest way to enable is using Enable-PSRemoting cmdlet, as follows:

This command does many things, including:

After enabling WMI, Otter will be able to connect to the server using a local Windows or domain account.

If Otter reports back an error when running a script or orchestration that looks like this:

This happens becasue the Otter Service does not trust the remote PowerShell host. To fix this, run the following PowerShell on your Otter Server:

To communicate with Linux servers, Otter uses SSH and SFTP, which nearly every Linux server already has enabled. Otter can use a private key or username/password to connect.

Adding Your Servers in Otter

Once your server has been prepared, you can add the server by going to Servers > Add Server, or you can use the infrastructure API.

The “Add Server” menu in the Otter UI will present you with three different options for the agent/communication type:

Otter can monitor servers for configuration changes and report when there's configuration drift. Server rolse are used for defining sets of configurations that can be assigned to any number of servers.

When "Detect configuration drift" is set, you have three options:

Click to the “Current Configuration” tab on that same screen to see the current configuration, which will indicate “Current” with a green checkmark or indicate “Drifted” with an orange forked line.

Otter can automatically collect information about the following packages types on a target server: 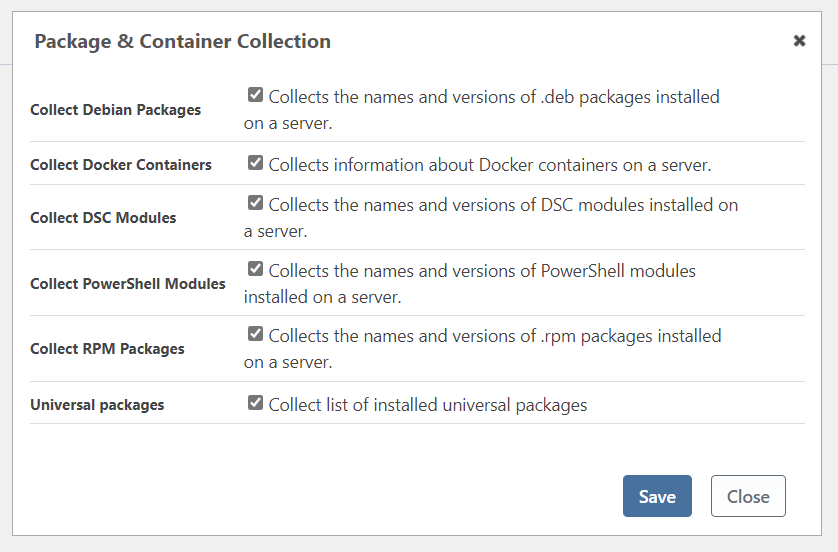 History of Jobs and Changes to Server

Executions tab shows recent executions off all jobs and routine configurations, along with detailed information such as the status (normal/error) ad duration

You can use filters to only display certain types of events. This helps with tasks such as identifying errors, especially if there is a long list of executions.

Server variables can be created and modified on the "Overview" page of a given server.

Servers, Status, Environment, and Roles can all be viewed in table-form by navigating to “Servers.” Clicking into each server, the “Overview” page displays details about the server.

In Otter, Environments are a logical grouping of Servers, and generally describes one stage of the development process (development, testing, Q/A, production, staging, etc). To change the environment of a server, edit the details tab.

You can associate one server with multiple environments, but this is not recommended as it can lead to unexpected behaviors.