What is a "server role" in Otter?
Contents

What is a "server role" in Otter?

In Otter, a server can be assigned any number of "server roles".

A server role contains desired configuration that describes what you want the server to do, what needs to be installed, or any other configuration. For example, you could create a server role (iss-server) that describes exactly how you want IIS to be configured on web servers, and a simpler role (like rdp-enabled) that would describe how you want RDP settings configured. You can assign both of those roles to a single server, so that you can have web servers you can RDP into.

While Otter can handle both highly granular server roles (i.e., thousands) and very simple server roles (i.e., one that describes the entire configuration for a specific server), we recommend against both. The tool may have no problem with extreme granularity, but your human teammates will. And making one server role define everything is equally inadvisable; it'll be hard for people to read.

You create a server role by navigating to Roles > Create Roles, or use the Infrastructure API to programmatically create one. 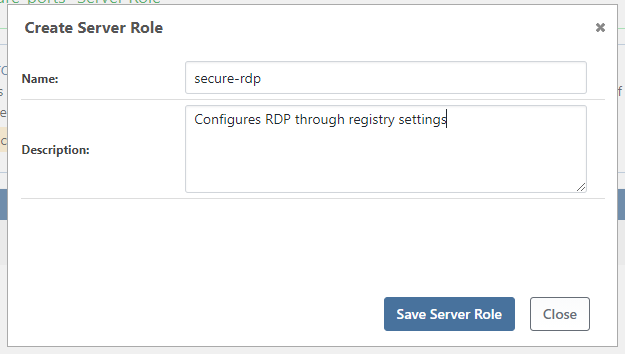 After creating a server role, you can navigate to the "Desired Configuration" tab to create OtterScript that will describe your server's configuration.

You can add Configuration Variables to server roles as well. These will be used by your desired configuration OtterScript, and can help you create more reusable OttreScript inside.

You can add server role variables by navigating to Roles > Server Role> “add” in “Variables” column.

Admins can “obscure the value of this variable from casual viewing” to add a layer of protection; this is NOT intended as a security measure, however.

Servers are assigned to roles (e.g., “accounting”) and environments (e.g., “Test”). An environment cannot be assigned a role. See What is an "environment" in Otter? to learn more.

You can define a role's dependencies (i.e., the other roles which are required) on the role overview page.

Expanding on the Accounts example further, we can define each application component as a separate role (accounts-db, accounts-svc, accounts-api, and accounts-web), and further separate out the non-accounts specific configuration into their own roles. 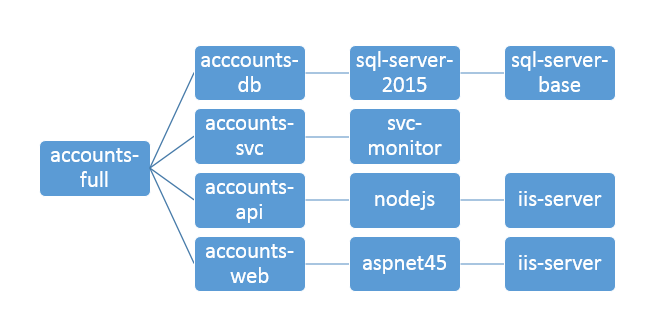 We could create a "placeholder" role (accounts-full) that simply depends on the four component roles, and would allow the entire account stack to be installed on a single server. Or, different servers could be assigned different Account roles.

When a configuration job is run against a server, Otter will assemble the server’s and its roles’ configuration plans into a single plan, and then execute it. Note that:

Otherwise, the configuration jobs will run as if all roles were added to the server directly.

A resource pool is a set of servers (defined by a role) that are used as a single, load-balanced resource. You may acquire an unused server from a resource pool, and then release it back into the pool once the needed tasks have been performed.

Visit the Resource Pools documentation of the Inedo Execution Engine for more information on how to configure a resource pool.