You can create a Blue-Green Deployment Sample application on your own instance of BuildMaster by just going to the Create New Application page. This sample will show you how you can implement Blue-Green deployments in your own applications.

From an end-user's perspective, there really is no Blue or Green environment: just a single Production environment. The blue-green deployment model looks something like this:

From IT's perspective, there are indeed two environments (Production-Blue and Production-Green), and different releases will be deployed to these environments: 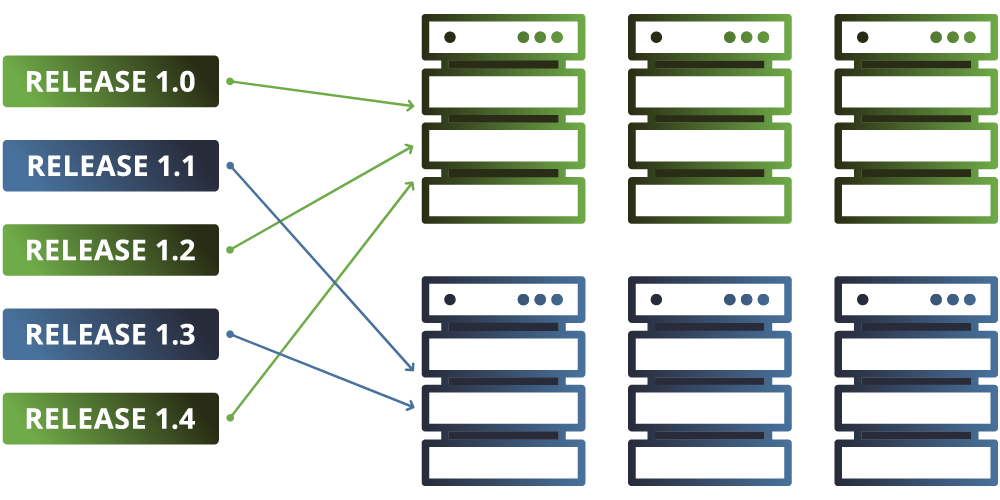 The primary benefit to using Blue-green deployments is zero downtime, but there are three additional benefits:

How to Perform Blue-Green Deployments in BuildMaster

We created a blue-green sample application that you can create in your own instance of BuildMaster. This application lets you visualize which release are Blue and Green (or undecided) as well as shows you what's in Blue and Green:

These steps will be based off of this application, but BuildMaster is very flexible, so you can customize this approach to however your environments require.

Once you've prepared your application as described above, you can just create a new release and select the Blue or Green pipeline as appropriate.

You may not know whether a release will target "Blue" or a "Green" until fairly close to release date. In this case, using a "Blue" or "Green" pipeline will be misleading, because it will imply that the target has already been decided.

While you can always change the release's pipeline at anytime, you should consider creating a third pipeline ("BlueGreen") that implies that descision hasn't been made yet. This pipeline should be configured as follows:

Once a build reaches the "Staging" stage, you can simply swap the releases pipeline to "Blue" or "Green", and continue deploying.

You can even simplify this process and give the user a choice when they deploy to the "Staging" stage. To do this:

The sample application has this release template, pipeline, and plan already configured for you to see.

How to Roll Back Blue-Green Deployments

If anything goes wrong after deploying, blue-green deployments make it very easy to quickly roll back. Instead of having to redeploy the entire build and all of the artifacts, you can just perform another environment swap.

Because the last stage of both the Blue and the Green pipelines simply swaps environments, you can just navigate to the build that was deployed in the opposite environment and redeploy it.

For example, in the above image, a Green-targeted build was just deployed. To roll back, simply navigate to the build in Production-Blue (1.0.1 - Build 1), and redeploy. This will execute the environment swap, and immediately restore the previous release.

Because your Blue and Green environments will have nearly identical hardware, they can also serve as a production and distaster recovery pair. After deploying to one environment (say Blue), and verifying that it's stable and won't be rolled back, you can simply deploy the same release to the other environment (Green).

This simply involves adding another stage to each of the pipelines after the "Swap" stage.