The Command-line reference is available on GitHub.

upack.exe is a cross-platform command-line tool used to create and install universal packages; you can also see which packages are installed on a machine.

upack.exe is a stand-alone program and does not require installation. Visit the GitHub Releases section to download the latest version.

The source code for upack.exe is hosted on GitHub.

Creating and Publishing a Universal Package with upack.exe

In this tutorial, we will take an existing website and package it into a Universal Package using the upack.exe tool. The files in Accounts.zip are just the build output of a basic .NET web application. For those unfamiliar with .NET, it could just as easily be a Java WAR file, a collection of PHP files, or even static HTML.

We'll also be using a PowerShell prompt (hence the PS >) and C:\tmp\accounts as a working directory, but you can do this on Linux or in the command prompt just the same.

In this step, we will create a Universal Package. The format of the package is simple to understand, and due to a few basic package properties, enables consistent deployment and distribution of the contents within Accounts.zip going forward.

Note: In a typical usage scenario, the "pack" step would be executed by a Continuous Integration server such as TeamCity or Jenkins immediately after build output is generated.

In PowerShell, navigate to C:\tmp\accounts, and enter the following command to package the contents into a Universal Package:

This will generate a universal package named Accounts-1.0.0.upack in the same directory.

Pushing a package to a Universal feed in ProGet

Once a package is created, we are now able to publish it to a Universal feed.

Note: In a typical usage scenario, the "push" step would also be executed by a Continuous Integration server sometime after package creation.

Before we can push the package, we must determine the endpoint of the ProGet feed to use it as the push source. After logging into ProGet and browsing to the feed, take note of the endpoint URL:

Using this value, we can now push our newly generated package to the feed using the following PowerShell command:

Naturally, Admin:Admin should be replaced with a valid username/password combination for the specific feed, or omitted entirely to authenticate as the current Windows user or anonymously depending on how ProGet is configured.

Once the package is published to the feed successfully, we can view the package details in ProGet: 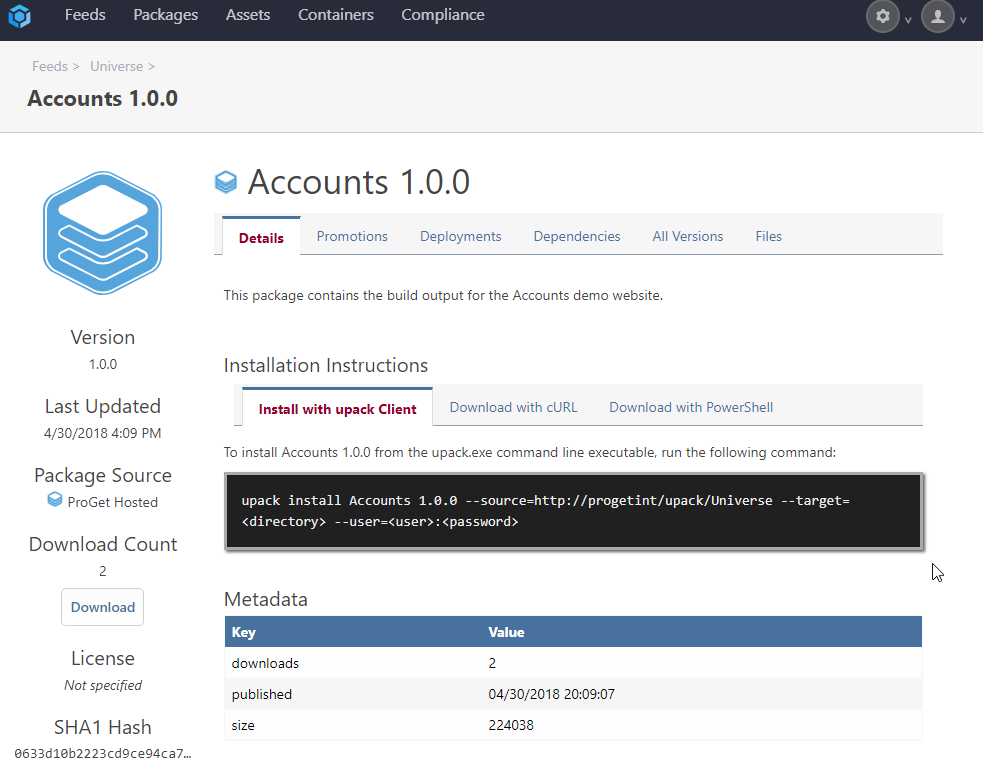 Finding and installing a package to install on a server

Once the package is pushed to ProGet, it can be installed on any server that can access ProGet. In PowerShell, enter the following command to install the latest package contents to an existing directory:

This will extract the package contents of the "Universe" feed in ProGet into C:\tmp\accounts\install.

Listing installed packages on a server

Once a package has been installed, upack.exe can query the Universal Package Registry on the local machine for installed packages with the list command:

After performing the above steps, this list will contain (at a minimum):

This list is not limited to what is installed by upack.exe, the Universal Package Registry will also contain packages installed from Otter, Hedgehog, BuildMaster, and Romp.

Verifying a downloaded package hash against a Universal feed

There may be cases when we obtain a package from a source other than installing from ProGet directly, or perhaps it was acquired from a different Universal feed (i.e. the package was promoted). In this case, it is useful to verify that the package contents are identical. This can be done by using the verify command:

The result of this command will either indicate that the hashes match, or issue an error to standard error if they are different.

If you only need to view the hash, you can use the hash command:

If the exact same pack command was used as described in this tutorial (and we haven’t changed Accounts.zip on our end), the output will be:

Of course, this is a standard SHA1 hash in hexadecimal format, so any existing tools (7zip, sha1sum, etc.) can be used to obtain a package hash. This hash could then be quickly compared to the SHA1 value displayed within ProGet to ensure the package contents are identical.

When deploying packages, it is common to rewrite package metadata such as version information (e.g. removing pre-release identifiers), adding/appending descriptions, or changing the group name. This is where repackaging comes in; Repackaging is the process of creating a new package from an existing package using exactly the same content as the original package. While the metadata of the package changes, a history of the package names and versions is also recorded for audit purposes.