What is a Variable in BuildMaster?
Contents

What is a Variable in BuildMaster?

Using variables, you can create reusable scripts that can deploy the same application to multiple environments and prompt users for parameters before creating or deploying the application.

Essentially, variables can be used in place of any value that you might want to change when your script is run, such as:

What is a Variable in BuildMaster?

Variables can refer to several different things inside of BuildMaster.

Configuration variables are static values that you can set on a number of different components within BuildMaster: applications, releases, builds, application groups, servers, server roles, environments, or globally.

You can add these from the UI, through the API, or using an operation in OtterScript. When you create a build using a pipeline, the Variable Prompts defined will also create configuration variables on the build or release.

You can define variables by going to the desired context (such as the specific application or server) and then adding a single one. You can also bulk edit all variables in that context. 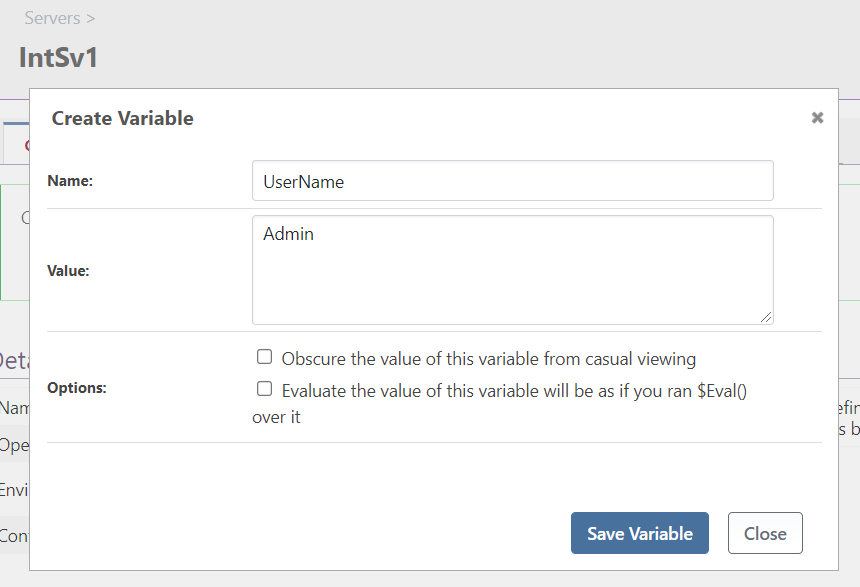 You can view all configuration variables across all contexts by navigating to Admin > Configuration Variables. This also lets you bulk edit all variables in Otter.

Configuration variables include the option to obscure the value of this variable from casual viewing. As the name implies, this only obscures the value by replacing it with (hidden) in the user interface. It is not intended for passwords, nor should this be used as a security feature.

Do not store sensitive information in variables; use secure credentials instead.

Variables inside of Other Variables

When creating a configuration variable, there is an option to "Evaluate the value of this variable will be as if you ran $Eval() over it".

This option instructs BuildMaster to evaluate variable expressions inside of your variable, which means that you can reference one variable from within another. This can help simplify the configuration variables you maintain in BuildMaster across many environments, servers, server roles, etc.

For example, let's say that you had dozens of servers that need to have the FooBar and MyBar applications installed, and you wanted them installed in a mostly consistent manner. You could set up configuration variables as follows:

With this scheme, on a production server with the MyBar role, the $MyBarPath variable would resolve to F:\Production\MyBarApp. This simplifies having to define the configuration variable over and over again.

Using the API to Read or Set Variables

You can use the Variables Management API to programmatically read and set variables in Otter. This allows external scripts and programs to see the values you've defined, as well as set them on environments, servers, server roles, etc.

Note that $myApiKey refers to an API Key that you'll need to set before use.

You may wish to have your scripts set variables on builds, or other items in BuildMaster. This can be a convenient way to store information such as URLs, versions, or other values you may need later.

For example, you could use the Set-BuildVariable operation to create or modify the $CIWebUrl variable on the current build.

You could set values on different builds by setting the Application, Release, and Build parameters of that operation.

Similarly, the Set-ReleaseVariable will create or modify a variable on the current release, or you could set the Application or Release parameter to target a different release.

The Set-ConfigurationVariable operation will allow you to create configuration variables on all other items.

Configuration variables cascade, which means that you can define a variable of the same name in multiple places and the correct value will be resolved at runtime.

The variable definition that's the closest match to the current context is used. This is determined as follows:

You can assign multiple scopes to a configuration variable; for example, you could define a variable that's associated with both the testing environment and the hdars-web role. A multi-scope variable simply adds precedence to the highest-scope (deployment is still closer than a Environment + Application).

Assigning multiple scopes to a single configuration variable can become confusing as the resolution rules are not intuitive. We generally discourage this use.

You can only create multi-scoped variables from the administration section, and they are visible (but not editable) on the servers, server roles, etc. that they are associated with.