Build plans are the instructions that tell BuildMaster exactly how to build and package your application. They are written in language called OtterScript, and can be developed using the drag-and-drop editor. This saves you from having to learn the syntax before you can start building a plan. You can switch back-and-forth between visual and text modes to get a feel for the syntax and structure of the language pretty quickly, and master it in no time. 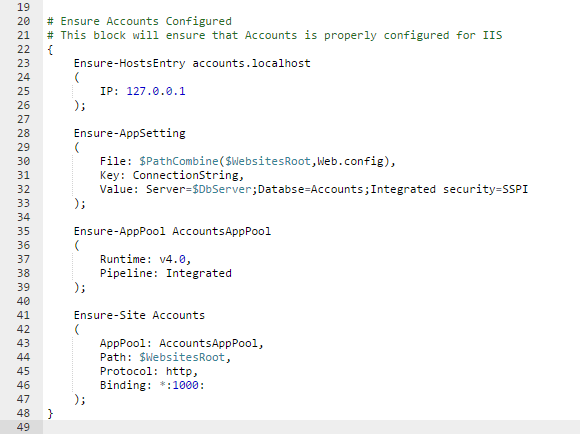 You can create a build plan at the application or global level. Global plans behave in exactly the same manner, except you may only reference global modules.

All build plans are run under the context of a build and a pipeline, except those defined as the target of a Repository Hook/Monitor plan. Visit the pipelines documentation for more information on how to configure pipeline stages and targets.

OtterScript is a Domain-Specific Language that was designed for high-level orchestration and automation across servers, and is used to represent build plans in BuildMaster.

To learn more, check out the OtterScript Guide in the Inedo Execution Engine documentation.

Script assets can be added to BuildMaster at the application- or global-level. Once added, your scripts will appear in the statement list in the visual plan editor, and the parameters to those scripts will be parsed and displayed as textboxes when editing in visual mode.

Modules are reusable plans that can be called from a build plan or other modules, as if it were an operation. Like build plans, modules can be created at the application- or global-level, and are edited using the visual plan editor.

To create or edit modules, go to the Modules tab on the plans listing page. Modules are available in the statements list in the visual plan editor.

Similar to operations, modules can have input- and output parameters. You can edit these by clicking on the Module Properties button in the Visual Plan Editor (when in visual mode), or by editing the OtterScript directly. These parameters are then accessible as variables within the module.

Modules are run within the scope of whatever block calls it, which means it will inherit all of that block's variables. As a result, you should generally avoid relying on externally-defined variables in modules.

BuildMaster 5.8 and later maintains a history of edits and allows rollback to any plan version, similar to a "revert" in source control. Version history is maintained for both build plans and modules.

On any plan's listing page, select the version number to display a list of all versions of the plan. From the Plan Version Listing page, there are options to compare any previous versions with the current. On the Plan Version Comparison page, any global plan or plan from any application visible to a user may be compared side-by-side.

To roll back to a previous version of a build plan, select the "edit" option of the desired version from the Plan Version Listing page, and then save the plan. This will create a new version of the plan with the same contents as the rollback target.